Mary Corse: ‘Then and Now’
Into the Infinite 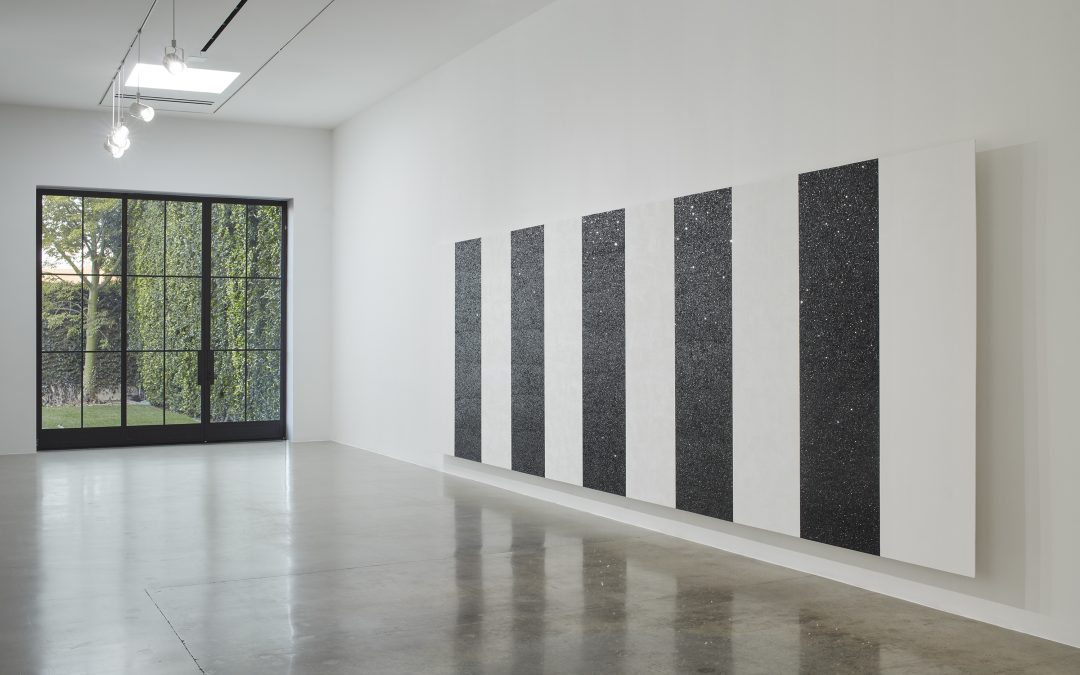 
Mary Corse embraces the legacy of male minimalists but re-invigorates this dialogue with her understanding of time related movement – inspired by her background as a ballet dancer. Corse infuses a kinesthetic element that expands the modernist minimalist dialogue through an aesthetic alchemy that makes her gender-fluid artwork “fe-minimalist.” Then and Now at Kayne Griffin Corcoran is thoughtfully curated to trace the critical turning points in Corse’s 50-year exploration of minimalist reductions that expand the field of aesthetic awareness through inter-active artworks that we experience by moving around them.

The Cold Room (1968/2017) is an immersive experience that took Corse almost five decades to fully conceptualize and complete. Inside this free-standing, temperature controlled space is a hovering field of light – made from argon and tubes powered by a Tesla coil – that create a chilled feeling of quiet reflection. Five monumental paintings in the main gallery (from the 1990s and early 2000’s) explore Corse’s signature motif: the pristine “ white inner band.” A selection of a new series of paintings, The DNA Series, is a return to the black acrylic squares Corse began exploring in the early 1970s.

Corse was a pioneer of the SoCal Light and Space movement, although male curators failed to include her in their major early shows. Nor was she given an equal position with her male colleagues, until recently. However, like Helen Pashgian, she was respected by her male peers and even championed by James Turrell. And while Corse didn’t live in Venice – where the male critics and curators had a bromance with the Venice boys’ club – she had a studio in East Hollywood before moving to Topanga Canyon. It was in Topanga where she worked privately, focusing on perceptual experiments, developing her knowledge of quantum physics, and honing an impressive technique. Experimenting with common materials like paint and high-tech Tesla coils, Corse combined high-frequency generators after taking classes in physics in the 1960s. This isolation and dedication paid off, with Corse’s works now found in numerous permanent collections, including in New York’s Solomon R. Guggenheim Museum and the J. Paul Getty Museum, as well as in Houston’s Menil Collection and the Los Angeles County Museum of Art. Indeed, Corse has upcoming exhibitions at Dia: Beacon and the Whitney Museum of American Art in May 2018.

Light, space and time have been obsessions of the most brilliant minds for centuries, bringing artists and physicists into critical dialogue through their parallel explorations. Scientists have often asked: “Why is the sky blue?” a question Einstein addressed in 1910 in his groundbreaking paper on “critical opalescence,” explaining the physical basis of the sky’s blue color in complex scientific equations. A year earlier, Henri Matisse, the great master of color, painted a variegated, light-filled blue sky in The Dance.

Coincidentally, Corse also draws on dance as a metaphor for the physics of relativity, using reflective and refractive materials like white paint mixed with glass micro-beads, to create artworks that constantly shift and change in surprising ways as the viewer takes time to slowly move around their dancing light. Visual imagination proceeds cognitive knowledge, and artists can visualize scientific breakthroughs before physicists can explain their mechanics. Leonard Shlain explains the following in Art and Physics: Parallel Visions in Space, Time and Light: “When Manet and Monet altered people’s experiences of color, Kirchhoff altered our knowledge about it.” Schlain concludes that,

“Einstein’s realization that light (which is color) is the quintessence of the universe paralleled the apotheosis of light by artists.” And before Einstein made this discovery, Claude Monet announced, “The real subject of every painting is light.” Einstein echoed this sentiment by admitting, “For the rest of my life I want to reflect on what light is.”

The Light and Space movement has defined SoCal art because it is anchored in personal experience of a physical space created by the distinctive atmospheric light that shapes native Californians’ perception. SoCal is also a space that resembles a time capsule because it is the locale for both futuristic outer space explorations and underground space exploration of prehistoric Ice Age remnants. Whereas physicists alter our knowledge of light, space, and time, artists alter our perceptual and emotional experience of this phenomenon. Corse’s understated artworks evoke the sublime by bridging the finite with the infinite, the material with the immaterial, and the visible with the invisible. The otherworldly dynamic of Corse’s works evoke Immanuel Kant’s philosophy of the sublime, or that which he analyzed as the invisible noumena beyond our subjective responses to sensory information that we can only experience as phenomena. The sublime, like Platonic “forms” (outside the metaphoric “cave”) can never be fully grasped as “the-thing-in-itself” (Kant). Corse’s artwork, then, is an aesthetic and emotional parallel to Kant’s analytic of the sublime, because she evokes an infinite experience we can never comprehend, but can feel in dancing glimmers of light.