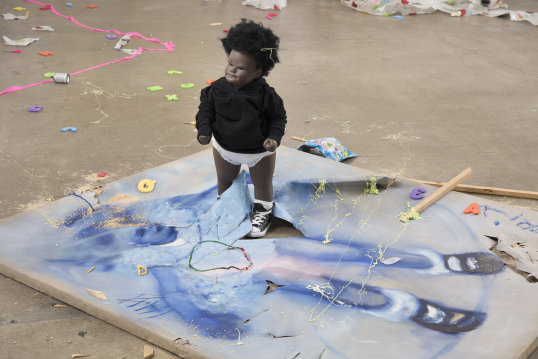 During the last two years, Los Angeles-based artist Kim Dingle created three separate bodies of work: Freight Train Crushes, Home Depot Coloring Books, and Blindfold Paintings. Together they highlight a constant exploration within Dingle’s work – the endurance of the inner child within each of us. The Freight Train Crushes juxtapose playful paintings on canvas – whimsical in color and pattern – with Dingle’s giant glassine, crumpled-up masses, also playful in form. These masses sit beneath the canvases, like disregarded first drafts, and are authoritative, if tamed. The paintings, which mimic the abstract patterns on the glassine mounds, hang like proudly finished recreations of what stand before them.

The Home Depot Coloring Books embrace the notion of a child-like desire to copy and create. Strokes of color are painted on the fragments of wood within the OSB (oriented strand board) that are typically found at any supply store or construction site. The seemingly simple concept results in paintings with a depth that echoes scenes of the natural world, refuting perceptions of naivety and unpacking the awareness that lies within the eyes of the innocent. The Blindfold Paintings are accompanied by a short video of Dingle’s process. These works, created while the artist was actually blindfolded, constitute her critique of contemporary works being so simple and childlike that they could be made by anyone, even when, yes, blindfolded! The resulting works depict her alter ego, a little girl named Priss that Dingle invented many years ago. Her juvenile certainty and friskiness result in paintings that feature a character that embodies these same qualities. Writhing with a chaotic energy, the works are also simple, matter-of-fact depictions of a universal, prepubescent experience.

Completing the exhibition: The little girl, removed from the canvas, is on the floor in another dimension. Porcelain dolls stand angrily among spray-painted walls, ripped drawings, and little objects, including foam alphabet letters and ripped pieces of paper. Like a whirlwind of emotion and destruction, the dolls appear to have projected their feelings onto the surfaces around them, in a manner not unlike the notorious Annabelle doll. Frightening in their ability to exude tremendous energy despite their artificiality, the dolls and the Priss paintings surrounding them further prove that Dingle’s mind is a keeper of the magic and multi-dimensionality of things that run rampant within a child’s perspective.