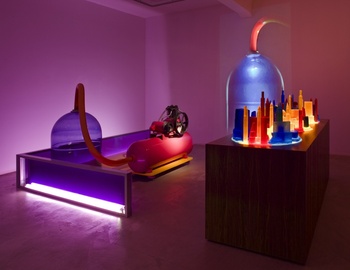 
Mike Kelley began his Kandor Series in 1999. Although pieces of it have been shown in the United States and abroad, the complete set of Kelley’s Kandors has not been seen in Los Angeles. The exhibition contextualizes this body of work within Kelley’s ouevre and is an expansive presentation of this complex and intriguing series that unfolds over numerous gallery spaces in several mediums. Kelley’s Kandors are based on the various depictions of Superman‘s birthplace culled from Superman comics. While Krypton was Superman’s planet, Kandor was his home city. According to the story, Superman was sent to Earth as a baby to escape the planet’s annihilation, and despite the fact that the villain Braniac shrunk the city and placed it in a bottle, Superman is able to keep the miniature city and its inhabitants alive by piping in Krypton’s atmosphere. Although Kandor always appears enclosed in a jar, there were few restrictions on its depiction. Kelley was fascinated by these “out-of-date image[s] of the future,” and chose twenty examples of the cartoon city to transform into three-dimensional sculptures. At first, Kelley had grandiose ideas for the work that included an online forum and an interactive convention space called Kandor-Con, but these aspects of the project never came to fruition. Instead, Kelley created replicas of the many illustrations of Kandors in myriad sizes, materials and scales. Exhibited for the first time in the United States, Kandors Full Set (2005-2009) is an immersive installation presented in the dark, where viewers can wander through the illuminated sculptures. To think, “seen one Kandor, seen them all,” negates the experience of the exhibition. All Kandors are not the same and while Kelley chose twenty images to use as a point of departure, he created an infinite array of possibilities.

The installation of Kandors at Hauser & Wirth is dark and noisy. It will draw crowds and will be impossible to experience in solitude. Although Kelley could not predict the future, the installation of his Kandors is a metaphor for the world today. As one wanders through the work, it is hard not to imagine being a citizen of the shrunken city, forever dependent on outside forces for survival and knowing that the powers of evil and destruction still lurk. The only solution is to be present in the installation and to indulge in the contradictions and questions this complex body of work brings to mind at this moment in time.