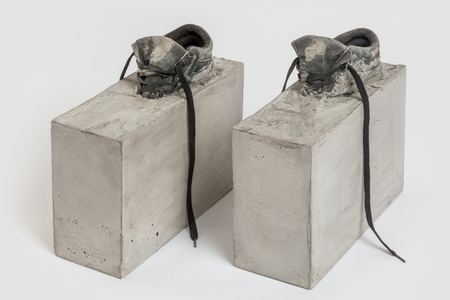 
Numerous cities throughout the world are experiencing surges in construction. It is impossible to travel and not see huge cranes and scaffolding lining streets. But since geography is fixed, the new often displaces the old: What is torn down is filled with history and memories that disappear forever. Construction requires destruction.

Teresa Braula Reis is a Lisbon-based artist whose work is concerned with aspects of building and decay. Using concrete as her primary material, she explores the relationship between temporality and permanence in the built environment. In her first Los Angeles exhibition, White Helmet, she brings the outside in, creating evocative sculptures that make reference to architecture and construction. A large site-specific work entitled, The passing hour, 2017, partially bisects the gallery. The piece is a long low barrier – four concrete blocks high – starting at the gallery wall and ending with an additional, taller concrete slab. This addendum is attached to a structural column in the center of the gallery and flows over a few of the cinder blocks. Fabricated from mortar, concrete and natural expansive minerals, this section of the piece was deliberately designed as a performance to crack as it set during the gallery opening, leaving cement shards and detritus in its wake, in part to illustrate the impermanence and fallibility of construction. Braula Reis thinks about the fact that construction, like making art, is a time-based process. Concrete is not a fast material. It must be poured into a mold and then allowed to dry. During this process a lot can happen, and it is the unknown subtleties and that time “in between” that fascinates her. For example, four separate works titled Helmet hang on the gallery walls. Each helmet is cast with a different type of concrete. Worn by workers for protection, a construction helmet is not usually considered an aesthetic object. But in Braula Reis’ presentation, each helmet becomes a unique work of art, whose utilitarian function has been negated.

While White Helmet is an exhibition of discreet objects, it holds together as an installation wherein each work informs the others. Three small white plaster casts of segments of floor, brick and roof tiles form the triptych To define a place, to hold it still, 2017, becoming wall-based minimalist abstractions. The homage to minimalist sculpture can also been seen in Rising column, a sense of absence. Here, Braula Reis presents a vertical wooden formation that appears like a mold for a support column, but this structure is non-functional. Her sculpture, carefully crafted from plywood and pine, has only three sides instead of four, so it could not hold any material poured into it. Braula Reis’ works allude to the creative process of building, yet simultaneously frustrate expectations, as what she creates in the gallery are artifacts rather than complete structures. The idea of frustration is most clearly articulated in If only I could stay (protective boots), where her work boots have been embedded in blocks of concrete, making movement an impossibility and rendering them unwearable. Similarly, in the video diptych 00:04:54 (in collaboration with James Lake), 2014, viewers watch a pile of sand slowly form on the floor as it is passed between the cupped hands of two figures until none is left. To define a place, to hold it still

This poetic yet ultimately futile act speaks to Braula Reis’ interest in the processes of construction and what that process yields: potential for shelter, changes in site lines, and eventual removal and replacement. By bringing construction materials inside the gallery and creating her works in situ, she acknowledges that anything built will ultimately be destroyed. Her works become ghosts, memories of what was or what could be and speak metaphorically to the impermanence of the built environment.