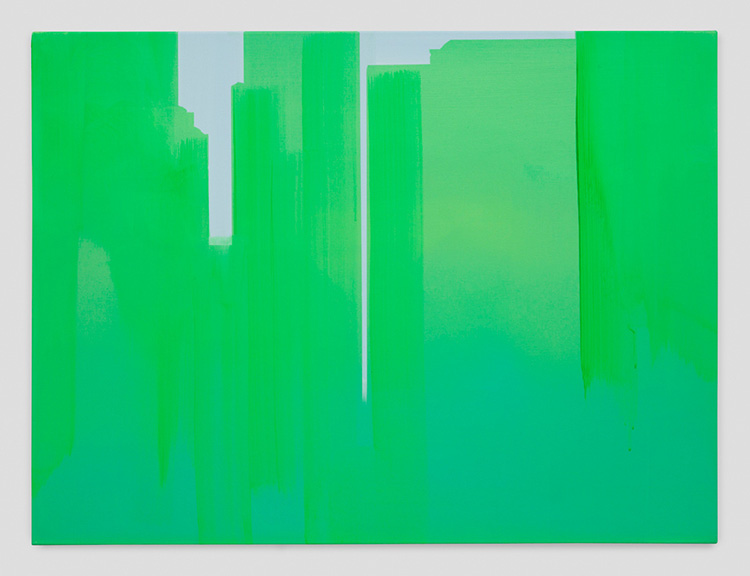 The works of Wanda Koop and Josh Callaghan make for beguiling artistic bedfellows at Night Gallery. Koop’s In Abstentia, was inspired by the Canadian-born artist having spent several months living in New York City. Her first solo show in the United States – and her L.A. debut – the colorful, highly abstract paintings feature blocks of solid color against gradient backgrounds and vice versa. These blocks are more than contained representations of Big Apple skyscrapers, they are reflections on man’s manipulation of nature. Manhattan, so often recognized by its clusters of high rises, is here presented through a different lens: nature dominates the canvas, the abstract buildings easily distinguishable among the expansive sky. The paintings are numerous and span a wide spectrum of sizes – some works place the viewer further into the distance than others – and though the buildings differ as well, each experience places the sky as the dominating aspect of the frame. Each piece is ultimately a collective, continuous ode to the infinite discourse between nature and the man-made. Josh Callaghan’s Legacy – sculptures made from both concrete and disassembled refrigerators – is allegorical in nature, the pieces persuading the viewer to contemplate not only the re-purposing of materials but also the re-purposing of ideas. With titles including Monument to World Peace and Monument to Space Exploration, Callaghan’s choice of material and medium adopt an entirely new meaning. The staple of modern life that is a refrigerator, the object relied upon for prolonged sustenance, is cut open. Our relationship with these objects is thus momentarily reconsidered – they stand no longer as merely household items, but instead as vehicles and monuments to great waves of progress in the larger context of human history. Pinecone and Tree reflect concepts that are more natural rather than electronic, but are systematic nonetheless. The pinecones have been cast with concrete from the artist’s own limbs. Placed on the ground without a base, they appear to seep into the floor, existing as symbols of the recycled and growing nature of artistic ideas and philosophies.

All of Callaghan’s works in this show are, more or less black, white and grey, whereas Koop’s paintings utilize a brilliant range of pigmentation. While Koop’s pieces seem uniform in their composition, Callaghan’s structures are wildly individual. Through their simultaneous uniformity and subtle nuance, the pieces in both shows tap into an enduring concept within the human experience – the dependence upon the creations of modern man to act as vehicles through which we examine the natural world surrounding us.