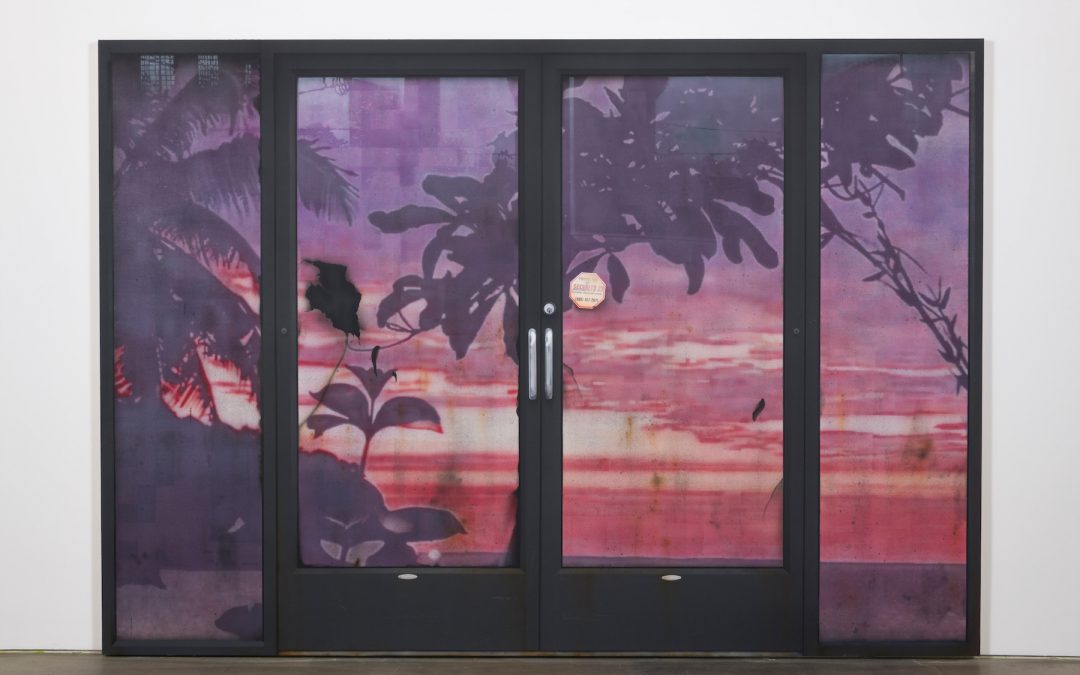 Sayre Gomez’s Déjà Vu is laid out like a maze, the rooms folding into each other with paintings playing on each other’s perspectives. Ranging from a small video loop – the exhibition begins with a scene from Disney’s 1941 film, Dumbo, in which an angry gorilla shakes the bars of its animated prison – to illusionistic scenic paintings, the common thread that of restraining one’s line of vision. On view is a large acrylic painting of a set of closed double doors that obscure the backdrop of a pink-hued sunset, as well as a series of acrylic works that explores the concept of focus. Notable is a fence with clearly recognizable vines, with the background faded to the point of uncomfortable ambiguity. In another, several buildings comprise the background, and in another, two women. Within each, the power lies in making the viewer feel trapped while remaining outside of reach.

A second double-doored storefront painting features large, messy pieces of paper, blocking any type of visual entry into the space. The reflective realism of the windows beckons the viewer, while the subject matter turns us away with more questions. There are also several works that appear to be made of wood with stickers affixed to them, reminiscent of a child’s playroom. A tranquil scene akin to gazing through a windowpane is found in Dreamer, which features a red mug and lit candlestick that overlook a gloomy backyard. With titles including Bad Boy, World Won’t Listen and Good Boy, the wood-and-sticker paintings further give the feeling of an angst-ridden childhood, one both trapped in emotion while simultaneously trying to project that emotion onto the world. By toying with perspectives and confinement, the artist is also toying with distribution of power. This is accentuated by the painting of a fighter pilot who looks like a Star Wars’ character. Depicting the vintage stereotypes of futuristic man, this is also an homage to the past. The straightforwardness of the painting establishes its dominance, with the viewer directly confronted by the harsh figure, but starkly trapped within its frame. Thus do we become aware that we are free, and in this way, are released out into the world. Restraint and captivity are also repeated themes, whether they be through stern, closed doors or through the hyper-focused, zoomed-in nature of the wood-and-sticker paintings. Transitioning with paintings of views from the outside world to views from the inside, Gomez establishes a journey of psychological introspection. The ambiguity of the artist’s scenic “outside” paintings is bound to offer the viewer a familiar view, but the haziness makes them cold, uncertain and consequently, foreign.

All photos courtesy of Ghebaly Gallery