A Stranger In Your Home
The Art of Amir H. Fallah 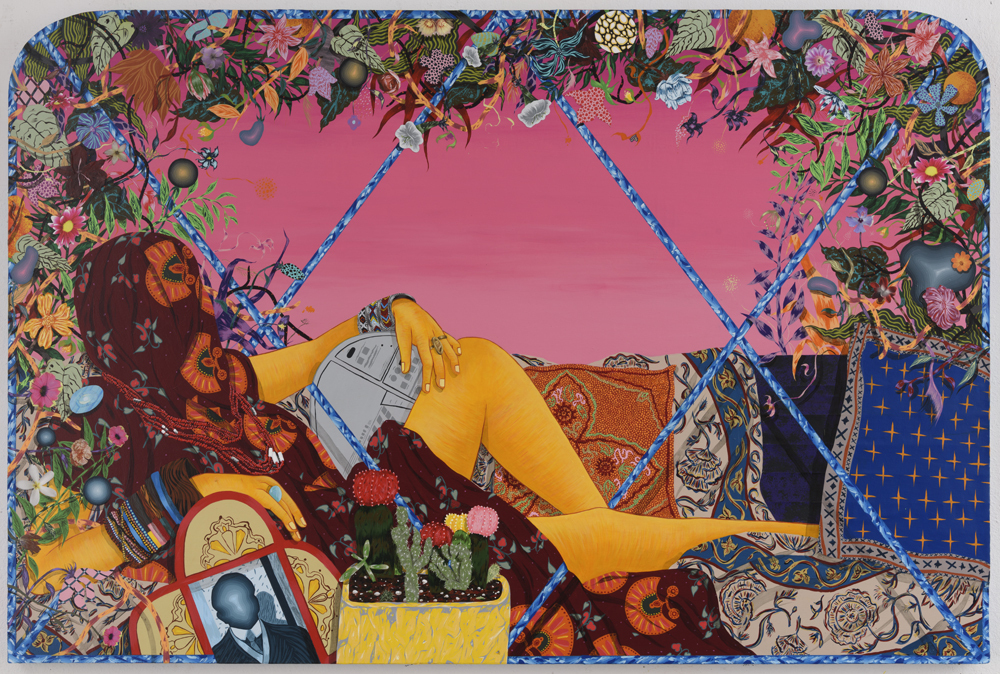 A Stranger In Your Home

Amir H. Fallah‘s exhibition, A Stranger In Your Home is ambitious and clearly illustrates he is a prolific and talented artist. In this exhibition, Fallah presents numerous detailed and layered paintings that depict anonymous figures whose heads are covered with patterned fabrics in lavish settings alongside their possessions. He juxtaposes these works with paintings of flora mixed with jewels and mementos. Stylistically, the works fuse motifs found in Islamic art with the tradition of Western portraiture, and in some ways share a kinship with the paintings of Kehinde Wiley. An interesting distinction between them is that Wiley empowers his sitters by placing them in art historical contexts, whereas Fallah hides their identities. Fallah’s works could be considered collaborations as he enters the homes of his immigrant subjects. Listening to their stories, he makes photographs of them surrounded by their possessions. He later transforms these photographs into elaborately decorative paintings, leaving no trace of the sitter’s facial features and protecting their identities by covering them in patterned fabrics. In Split Between Faraway Lands, Fallah depicts a bright, orange-skinned woman in the center of a diamond-shaped canvas. She sits in the dirt among small rocks and plants, surrounded by personal objects. Behind her, the upper half of the composition is split: On one side is a purple and black checkerboard pattern; the other side depicts fantastical plant life. A blue and pink painted trim frames most of the work. yet then cuts across the image to capture the subject within the shape of a “Z.”

Each painting employs similar compositional devices, layering and bisecting the frame with myriad elements that isolate and imprison the sitter. At first glance, the works are seductive, and because of their patterns and bright colors, seemingly benign. However, upon closer examination, Fallah’s paintings speak to both personal and universal issues confronting today’s immigrants. How does one feel at home in a foreign land? Does one change their aesthetic to assimilate? Fallah’s works cry out ‘no,’ underlining how important it is to remain true to one’s heritage.

Fallah also identifies with the plight of those he depicts. In the center of the gallery is the installation Embracing the World, a house-shaped, painted structure that contains an illuminated self-portrait made from stained glass. In this image, the artist is draped in purple fabric, tenderly holding a sock monkey in his arms as if it were his child. An accompanying audio recording recounts the narrative of Fallah’s parents’ immigration from Iran to the U.S. Ultimately, Fallah places ‘real’ people in fantasy settings, surrounding them with personal objects while simultaneously masking their identities in order to investigate geopolitical and psychological borders.