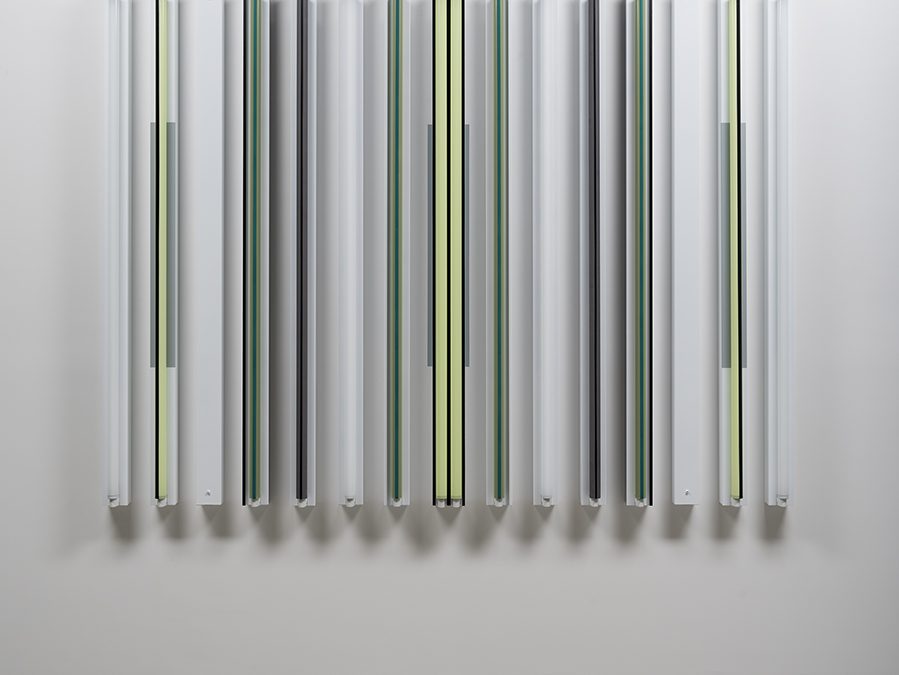 Robert Irwin’s artworks are vehicles for questioning the way we see the world. Like a philosopher, Irwin is interested in questions that expand our cognitive understanding but as an artist he thinks through sensitive feeling. Irwin is often quoted for admitting “ there are things in the world more beautiful than any art I’ve created.” For five decades Irwin has created “conditional art” that responds to the surrounding light conditions of a space to expand our aesthetic awareness. There are no drawings in Robert Irwin’s exhibition Drawings at Quint Projects. He lists the materials as “ shadow+ reflection+ color.” Why would Irwin call light fixture sculptures that are not wired for electricity, “drawings’? These drawings without marks – like his early paintings without marks – question assumptions around a category of art. Irwin insists “ It’s a challenge to see them as drawings.”

Irwin uses the “ commonest things” he could find: manufactured fluorescent light tubes and fixtures combined with colored gels he “had around for a couple of years.” But they are not lit up as we would expect. Why? Because by leaving them unlit, Irwin draws our attention to light conditions in the gallery space we would not usually see. Irwin explains: “Every space has light of some kind and we act as if it isn’t there.” Irwin invites the viewer to be a receptive part of this process, by leaving the fixtures unlit. Thus he draws our attention to other relational properties emphasizing, “They are all lines and planes and in this way rely on drawing elements.” Irwin recalls that early in his artistic development, “What I really wanted to do was make a painting without a mark.” This led him to question why he was a painter at all, because he was more interested in the “qualitative” changes caused by a shadow around a painting than anything inside the frame. Moving beyond the picture frame, he then moved beyond the gallery, creating ephemeral works and outdoor installations in order to raise phenomenological questions about the way we look at the world, our cognitive selves, and perception itself. Irwin draws on Husserl‘s philosophy in his quest to pare down the elements in minimalist artwork as a “phenomenological reduction.” In this installation he extracts the dominant light element in these old sculptures by installing them in the gallery, unlit. At first, I was perplexed by this absence of artificial light because I assumed light would emanate from the fluorescent tubes. I asked the gallery director Roy Porello why Irwin didn’t turn them on?

Without saying a word, Porello took me outside, then back inside. This allowed me to see these artworks changing into mesmerizing muted colors that evoke nature, although they are made of industrial materials. I had to concentrate to realize that I was blinded by an unconscious assumption that was limiting my perception because illuminating the artwork with artificial light would be an unnecessary element. It was a definitive ‘aha’ moment of seeing how Irwin accomplished a surprising phenomenological reduction that led me to attune my perception. Each work in this exhibition is constructed of narrow white bases mounted vertically with fifteen attached light fixtures. The perceptual possibilities of shadow, reflection and color interacting and subtly shifting with changes of light conditions and the viewer’s perspective are more significant than the hardware itself – which he uses as a vehicle. The subtle variations between individual artworks are created by different color hues and line widths. In Past Due, Stella Dallas and Cumulus, Irwin uses muted color values but the lines inside and on the borders of individual tubes are emphasized. The shadows also change over the course of the day. Less is more in these fascinating drawings because it is the viewer’s response that – like dancing a tango – becomes the “conditional art.”

Irwin is a luminary of the SoCal Light and Space Movement who is world-acclaimed for three of the most phenomenal artworks of our time: Central Garden at the Getty Center in Los Angeles (1997), Excursus: Homage to the Square at Dia: Beacon in New York (1998/2015) and Untitled (dawn to dusk) at Chinati Foundation in Marfa (2016). Drawings adds a reflective footnote to his lifelong minimalist quest of extracting visual elements in phenomenal reductions that expand the field of aesthetic possibilities.