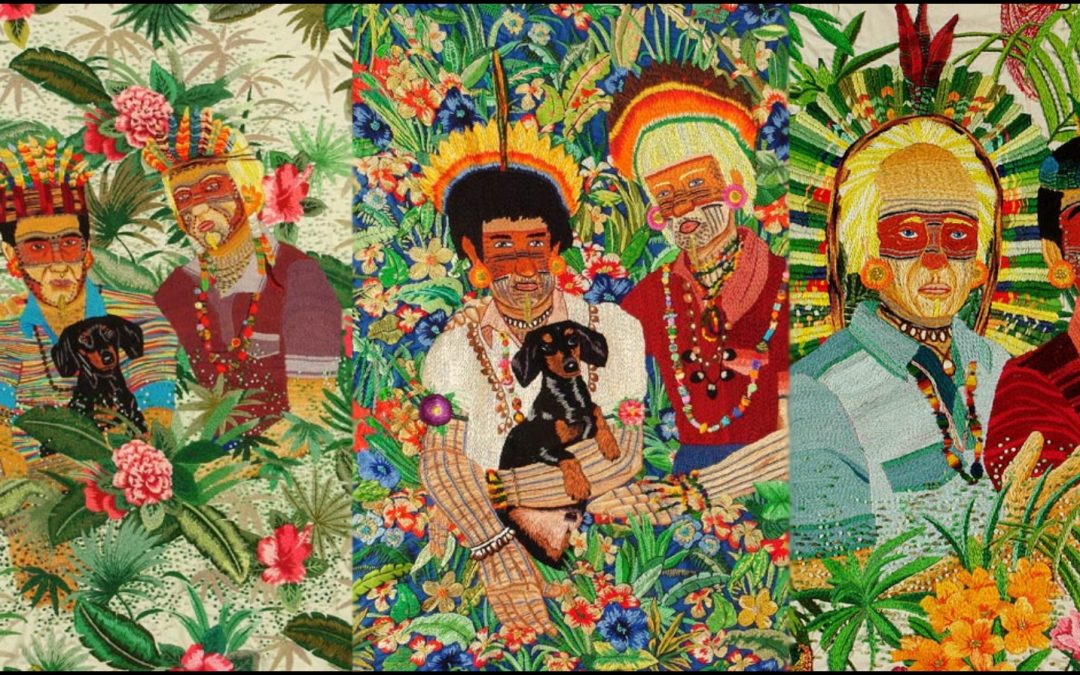 With the knitted pink pussyhat on full display in recent months, a political movement may not have been born, but it certainly coalesced after Donald Trump’s unexpected election victory. Knitting, however, and its sister forms, including needlepoint, embroidery, crocheting, quilting, lace, sewing, yarn-bombing and macramé, have been around for centuries. As today’s gender issues are coming to the forefront at a rapid pace, a radical new movement also seems to be afoot – or at hand: Fiber art, which combines fine art traditions with thread-based craft materials and processes, is the perfect medium for the LGBTQ community to express itself. It could even be called craftivism, with the beautiful coffee table book, Queer Threads: Crafting Identity and Community, published by AMMO and co-edited by John Chaich and fashion mogul Todd Oldham, featuring the works of 30 actively engaged fiber artists.

The tome evolved from an exhibition of the same name that Chaich curated in 2014 at the Leslie-Lohman Museum of Gay and Lesbian Art in New York, and subsequently traveled to MICA, Maryland’s Institute College of Art in 2015.

Brooklyn-based Chaich, who coined the name Queer Threads, though not a maker himself, said he’s seen a definite uptick in the visibility of queer artists working in fiber in the last three to five years.

“All of my projects have been based at the intersection of queer activism and HIV-AIDS activism through the visual arts. There’s been an increase in at least the visibility of established and emerging queer artists working in fiber, whether you see this on Instagram or shown formally in galleries or museums, so I think there’s a tremendous popularity that seems to be growing and growing.”

A recent panel discussion at the Craft and Folk Art Museum that also featured Chaich and the quintet of artists, shed light on how this inherently gendered medium is turning the form on its head: What was normally seen as feminine can now be decidedly masculine; what may have been considered a craft, or “low” art, is elevated to high; and what was, for eons, typically reserved for still life tableaux, portraits, hanging pots or decorative coverlets, is now the province of provocation – sexually and otherwise, in addition to often being exquisite, painstakingly rendered works unto themselves. In other words, the queering of fiber art is in full force, with the purveyors of the same examining such things as roles, relationships, icons and those areas of socialization aligned with and surrounding queer culture.

What was normally seen as feminine can now be decidedly masculine; what may have been considered a craft, or “low” art, is elevated to high; and what was, for eons, typically reserved for still life tableaux, portraits, hanging pots or decorative coverlets, is now the province of provocation – sexually and otherwise, in addition to often being exquisite, painstakingly rendered works unto themselves.

Ben Cuevas, 30, is a sculptor, performance artist and knitter, practices he honed while studying art at Massachusetts’ Hampshire College. His work, Genitosexual, a wool, silk, cotton and polyester fiber-filled work from 2009, represents the sacral chakra, which relates to sexuality, creativity and well-being, while at the same time, is also a fusion of male and female genitals. Cuevas said he brought sexuality together with being queer through knitting, which he also considers meditative.

“It started for me from historically feminine connotations of knitting, even though knitting hasn’t always been considered women’s work. The modern conception of it comes from that, and from that angle it seems very fused with gender and sexuality from the get go. Being queer and a gender queer person doesn’t define my art, but I bring it into my work and it influences it.”

Cuevas’ Duality #1: Masculine/Feminine, a magenta and gray knitted knee-length jumpsuit displayed on a double mannequin and fused together at the back, could be a Rei Kawakubo (Comme des Garçons) creation, or garb for Siamese twins. Joking aside, what Cuevas intended was for people to see how the masculine and feminine are connected. “That piece was inspired by the Aristophanes’ creation myth, where there were two selves in one form. The male and female mannequins are connected by those garments I knitted out of a patchwork of squares,” added Cuevas, “and the surface detail on each one of those squares also references male and female genitalia. For me it’s a way of visually representing gender as a patchwork of various expressions combined to make a whole.”

Cuevas, whose recent work, “Twitterstorm” is part of a group show, “Mirame! Expressions of Queer Latinx Art,” on view at the Plaza de Cultural y Artes in downtown L.A. through December 9, also feels that queerness in textiles is having a moment.

“With the political climate being what it is, there’s already a strong connection between craft and activism, and we’re only going to be seeing more political, queer, radical leftist work that’s pushing against this very conservative era, and “Queer Threads” is a marker.

Lest one thinks that the queer fiber art trend is all sexual and political gravitas, a streak of humor can also be found in the form. For Nathan Vincent, 36, who studied drawing and painting at SUNY Purchase in New York before he began to embroider on his paintings, whimsy is an essential element of his work. His eyebrow-raiser, Locker Room, from 2011, is a walk-in, life-size installation featuring lockers, shower stands, urinals and benches. Made from foam, wood, and yes, oodles of yarn, these are definitely not your grandmother’s crocheted tchotchkes.

“When I first started,” explained Vincent, “I had this feeling that artists were trying to be too serious – that if you look at the art world, the official art world, it seems there are a lot of serious characters. They’re trying to make a statement and push boundaries, and I think that’s great, but that wasn’t who I was. I come from a sarcastic, humorous, cheesy and corny household, and that’s what resonates with me.”

Vincent, who moved to Los Angeles in February, added, “if you can get someone to laugh or think something is funny, they’re more willing to engage with the art work, spend more time with it and ladder up to the deeper issues.”

Having once appeared on Martha Stewart’s television show with his crocheted deer head, lawn mower and bear rug (“Your crocheting technique is excellent,” she told him), Vincent, nevertheless, has strong ideas on gender identity.

“The interesting thing for me is that gender identity and sexual orientation are very separate. You can be gay and be masculine or very feminine, or you can be straight and be feminine. Those things are separate, and I think what I’m dealing with in my art work is more around gender roles – the permission of gender and why is it that when you’re a man you’re supposed to do certain things, or culture says that you should act a certain way, speak a certain way, versus when you’re a woman, you’re supposed to do other things. “That’s what I think of when I think of gender roles, and that’s what I’m trying to do in my art work – to expand the definition of masculinity, giving masculinity some tenderness or vulnerability.”

Vincent’s cavalry of 16 olive green and earth-toned, gun-toting crocheted soldiers, “Let’s Play War,” from 2014-15, typifies that thinking. “With the army men, those pieces are humorous on some level, but they also have a serious side to them. Yes, I’m talking about violence, aggression, and how young people play with toy soldiers, but there’s also the light-heartedness and nostalgia that I build into my work that allows people to engage on a deeper level over time.”

Aubrey Longley-Cook, 31, is another recent L.A. transplant. Having begun to embroider after his mother died of cancer in 2001, he also studied animation at the Rhode Island School of Design, and is able to combine a passion for sequential movement through imagery with his love for needlepoint and embroidery.

Longley-Cook’s 14-frame portrait of his dog, Gus, has an innocent, heartfelt quality that is also a nod to the English photographer Eadweard Muybridge and his pioneering studies in motion. Leading a workshop when he lived in Atlanta, Longley-Cook and the participants created a 35-frame cross-stitched portrait of the drag artist, RuPaul. That process aligns with his philosophy of making community conscious work that documents queer narratives. As a gay man, Longley-Cook acknowledged that he’s had to rethink his understanding of what it means to be a family. By doing portraiture as “interlooping narratives,” he pointed out, “it’s easy to engage in a community and documentation. Also, by putting a portrait in stitches, it feels like the amount of time and effort and handiwork that goes into it is very intimate. That,” Longley-Cook explained, “lends itself to portraiture because it’s such a tender, time-extensive process.”

Currently, Longley-Cook is working on a series that investigates GIF culture, meme culture, new ways of communication, and how the Internet and mobile devices are changing the ways in which people express themselves.

“It’s a series that plays with text-based work and web graphics, but done in cross-stitch. It’s ironic and satirical, and I find I’ve been making more social statements than before. How can you not as an artist? We’re like antennae – we pick up signals and distribute them out.”

That distribution does seem to be widening. Chaich said that he sees more fiber arts programs across the country at universities and art schools that are attracting queer students or faculty. “I also think there’s a lot of work being produced in fiber departments, though not necessarily just queer-related. But I do think it’s a sign that fiber arts feels more visceral and attractive than ever before.”

Indeed, Nathan Vincent believes that fiber art is, “about to blow up and expand in a big way. There was a movement in the 60’s,” he recalled, “which was short-lived and quickly burned out, which isn’t to say there weren’t artists who were doing fine art using things like macramé. And a lot of natural fiber weavings, tapestries and wall hangings were a big part of that.

“But it petered out in the public attention. I don’t want to say that it stopped, but people stopped paying attention. Now it has more staying power,” added Vincent, “just because of the attention it’s receiving.

“We’re in such a digital world now and there’s so much happening on screens and not on our hands,” he continued, “and people are more interested in returning to tactile work, where it’s more hands-on and personal. Because we spend so much time looking at screens, people want to come back to the real.” This story was originally published by KCET Artbound, June 12, 2017.

Victoria Looseleaf is an award-winning arts journalist who has been a regular contributor to the Los Angeles Times, the New York Times, KCET Artbound and other outlets, including her widely-read blog, The Looseleaf Report. In addition, she covers arts festivals around the world, filing datelines from cultural hot spots that include Berlin, Venice and Abu Dhabi. Her feminist novella in verse, Isn’t It Rich? is being adapted for the stage.